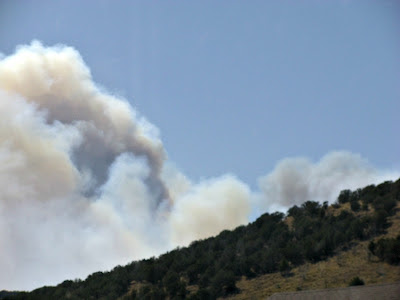 I knew there was a fire on the mountain near us, but this was much, much worse than I was expecting to see.  I logged onto the computer to see what was going on and learned that they were evacuating about 200 homes near us.  Winds were blowing strong from the south pushing the fire directly toward our city.  It was right about now that I started to worry.  It was time to start making some choices.  Do I start packing up some clothes, do we wait it out?  Honestly it was nerve-wracking.  And the kids started getting nervous too.  At one point three of the four of them were in tears worried about leaving the house, worried about the fire, worried about their stuff.  I had to sit them all down, talk about why they were evacuating, what would happen if we were asked to leave, what were the chances of something happening to our home (I explained that this was very, VERY small) but they were worried and upset.  Not the most fun place for a mom to be.  It was a balance between being prepared and calming the fears of the children.  I decided to let the need to be prepared act as a way for the kids to feel like they were in some control of what was going on.  It turns out it worked.  I had each of them pack up a few changes of clothes and a few of their favorite things.  This seemed to calm them down.  We went out to lunch (my husband had come home from work- just in case) and drove around to see what was going on with the fire.  Things were looking pretty good for us, but we decided to load up the car just in case.  Especially after we saw this: 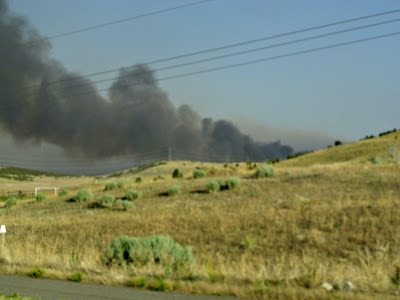 This was a flare-up, much closer to our house, and on the opposite end of the fire they were focusing on.  This was really the first time I seriously thought our home might be in trouble.  When that thought comes into your mind, you really wonder about what things you want to save and what things can be replaced.  Honestly, I was sick about the amount of supplies and fabric that would be lost.  But, we really don’t have very much that can’t simply be replaced.  I did pull out a couple of oil paintings my grandmother painted of her parents years ago before she passed away, but other than that, we mostly grabbed what we would need for a  few days away from home, our laptops and the wedding album.  That was pretty much it.  It was really interesting to me what we chose and really how easy it was to let go of almost everything we have spent so much time working for.  I’m sure if we were ever really officially evacuated, we probably would have run back and pulled out a few more things. 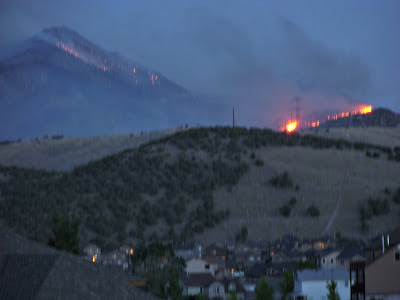 We ended up staying the night at my in-laws house.  They live pretty close to us, but across a street and far enough away from the fire that the kids felt much better about it.  This is the view from their porch.  The hill in front is the hill our neighborhood backs onto.  You can’t see our house in the picture, but it’s just to the right at the bottom of that hill.  If I wasn’t worried before, after seeing this I certainly was. 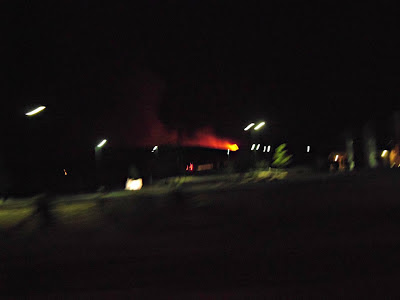 At about 11 my husband and I decided to go for a drive and see if we could see what was going on with the fire.  This picture is driving past the kids’ school which is just barely to the west of our house.  We walk up in these hills all the time. 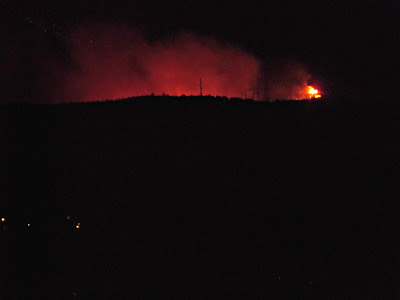 This is the same hill from the previous picture- at about midnight.  They never did evacuate our neighborhood, so the fire was never as close as we were afraid it was, especially after watching this for a few hours Friday night.
After about 12:30 I was exhausted from the worry and wondering and decided it was time to go to bed.  I woke up about 2 hours later and all I can say is a miracle happened.  In that short amount of time the wind died and it was like someone put a big lid over the fire- it simply wasn’t there anymore.  You couldn’t make out the hill at all, all you could see were a few glowing spots on the mountain a considerable distance away.
It was astounding to me.  I went back to bed and slept peacefully until the morning. (well, a few more hours anyway.)  And that was pretty much it.  Even when the heat of the day came on Saturday and the winds picked up, we never had any reason to worry about our home again.
And now, Monday, the fire is 100% contained, there were no structures lost and everyone got to go back home.
I love where we live, and even with the proximity to the mountain and the concerns about fires and the wildlife that goes with it, I wouldn’t change it for anything.  I’m grateful that even though we had a pretty good scare, everything turned out just fine. But, I’m also grateful to know that if the worst had happened, and we lost our home, we would have been just fine because we were all safe and together and our stuff is just that, stuff.
It makes me wonder why we put so much energy into “getting” when it can all be taken away in an instant.  After a weekend filled with choices and realizing what really matters and what doesn’t, I’m holding my kids a bit closer, letting go of the rat race a little bit more and choosing family and choosing happiness (or at least really trying to) every day.
Hope your Monday feels just as blessed as mine does.  And since we’re on the subject- please send your prayers for all those who are still in harms’ way- as there are many major fires still burning in our state.  And any time you have the chance to thank a firefighter, or police officer or anyone else who sacrifices their time and safety for the well-being of others- please take it.  We are so lucky to have them.
XOXO,
Amy

Flower Art Piece made with Cricut Explore- and a video

In the Middle of it all…

Links below are Affiliate links which will take you to sites that provide monetary compensation to me if purchases are made. There is no cost to you and all products are things that I stand behind and use myself.